I usually do a predictions post on fb and let it stand, regardless of developments as we get closer to the event. This year, though, I had Paige predicted to win the Womens Royal Rumble, and she is unfortunately unable to compete due to injury, and so I decided to do a revision. I'm adding undercard and NXT takeover predictions, and leaving Kiddo's original Royal Rumble predictions intact.

This is a tough one to call. Really depends if they want to have Baszler dominating the division right from the start, or if they would rather give her some more seasoning and experience. Plans for Moon on the main roster could also be a factor here.

I haven't heard anything about whether Tomaso Ciampa is cleared to compete. If he is, then I think he interferes here. But even so, the eventual clash between the former DIY members will be more intense with Gargano as champion.

This seems like a setup for Dolph Ziggler to return, but is that too obvious a way to go here?

My Order of Entry (revised to account for some injury issues)

1. Sasha Banks
2. Naomi (because really, if someone is going to get to do their full entrance, it should be Naomi!)|
3. Sarah Logan
4. Alicia Foxx
5. Ruby Riott
6. Liv Morgan (cue Riott Squad domination for the next few entries).
7. Dana Brooke
8. Carmella
9. Mickey James
10. Nia Jax
11. Tamina (Yeah, that should just about do it for Riott Squad dominance.. so now it's all Nia & Tamina... No, wait...)
12. Asuka
13. Blue Pants (fastest elimination!)
14. Sonya Deville
15. Bayley
16. Mandy Rose
17. Kairi Sane
18. Lana
19. Nikki Bella (or Brie; I'm guessing we get one, but not both)
20. Beth Phoenix (Wild guess here; I'm figuring they go with a couple of returning legends).
21. Lacy Evans
22. Billie Kay
23. Shayna Baszler
24. Peyton Royce
25. Ember Moon
26. Natalya
27. Trish Stratus (another wild guess)
28. Nikki Cross
29. Becky Lynch
30. Ronda Rousey
I'm still going with the idea that Asuka does not win this thing. And even if Rousey does enter (the latest reports have her out of the US filming a movie this weekend, but I left her in my prediction just in case it's all a massive misdirection), I don't think she wins the whole thing in her debut. So I'm going with Becky Lynch, to set up Lynch vs. Charlotte at Wrestlemania. Asuka wins the Raw Womens Title in the Elimination Chamber, and she could face Rousey at Wrestlemania. But I admit there are a lot of ways this could go, including the straight-up dominant win for Asuka.

Kiddo's Order of Entry (I left this one as originally written)

Kiddo's Pick: Rusev (After all, the match is taking place on Rusev Day!)

(I'm keeping this intact from when I originally wrote it. Interestingly, something along these lines has actually become considerably less unlikely in recent weeks.).

Unlikely scenario: This scenario assumes that Kevin Owens wins the WWE Championship earlier in the night. When Matt Hardy enters at #26, the other remaining entrants are Anderson and Gallows, Samoa Joe, Miz, Nakamura, Pete Dunne, Sami Zayn, and Finn Balor and Seth Rollins, who have lasted since early in the match.

#27 is AJ Styles, who immediately tosses Zayn. Reigns at #28 goes on a tear, eliminating Miz, Joe, and Dunne. Cena at #29 tosses Rollins and Hardy, then Reigns (to the dismay of the crowd) throws out Nakamura. Cass comes in at #30 and gets near-eliminations on Cena and Reigns before they quickly team up to toss him.

Reigns and Cena turn around and they are facing...

Commence with the (we're still not calling it the Bullet) Club beatdown. Reigns is tossed. Cena is tossed.

"Too Sweet" salute in the center of the ring, and Balor, Anderson, and Gallows all exit over the top rope.

Your winner: AJ Styles. And the Club is back.

Posted by RickSilvaWriting at 9:29 PM No comments:

This week saw a rare instance of snow in Shanghai, and an actual snow day on Friday. We got an unexpected long weekend, which is nice even if the policy is that we'll make the day up on a Saturday in March.

Captain Underpants and the Invasion of the Incredibly Naughty Cafeteria Ladies From Outer Space and the Subsequent Assault of the Equally Evil Lunchroom Zombie Nerds by Dav Pilkey. (4*).

Royal Rumble weekend has arrived! I posted my predictions a while ago in a Facebook post, but I plan to do a revised version here (in light of recent injuries, I've had to change some of my predictions). (Edit: Predictions are done. Find them here!). NXT Takeover will air here Sunday morning, and Royal Rumble Monday morning, so I'll be a bit late getting to see the Rumble (no spoilers, please!). I can't watch Mixed Match Challenge when it airs due to lack of Facebook Watch access, but the first two matches showed up on WWE network about 5 days after airing, and I thought they were both fun. Also props to Velveteen Dream and Johnny Gargano, who put on a great match ahead of Takeover on this week's NXT!

Next movie I'm likely to see will be Black Panther, but I haven't looked up the China release date. I also thought the second Pacific Rim: Uprising trailer was a lot better than the first one, and I'm now looking forward to seeing it. The only reason it was even made was the fact that the first movie did so well in China, so the sequel should be a big deal over here.

We are hosting visitors for our first Lunar New Year here in Shanghai. Still working out travel plans for Spring break, and for the summer.

Posted by RickSilvaWriting at 6:44 PM No comments:

This was our first five-day week of school in 2018, and was fairly busy with work-related stuff. I did manage to get in some time for some reading and reviews.

Captain Underpants and the Attack of the Talking Toilets by Dav Pilkey. (4*).

I'm supporting NYC Books Through Bars, which sends donated books to incarcerated persons in New York and around the USA.

Lunar New Year break in February will have us hosting friends we met in Vietnam. We're excited to get to show them around Shanghai!

The Kiddo is getting organized for his science fair project this weekend. The science fair is at the beginning of March.

Travel plans are still pretty vague at this point. We expect to be heading to New England USA during the summer, and we're hoping to do some traveling within China on our Spring break in April.
Posted by RickSilvaWriting at 5:27 PM No comments:

I started this around New Years last year, and managed to do it again this year. This is a set of collages from my travels in 2017. I did a collage for each country I spent time in, plus an additional collage of just wildlife photos.

I technically started 2017 in Cambodia, but I was on a bus heading for the Vietnam border on New Year's Day. We only had two weeks between our Christmas break and Tet break, and during that Tet break, I went to Bangkok, Thailand for a job fair. We managed to fit in some sightseeing around the business portion of the trip.

Here are some of my best photos from Thailand: 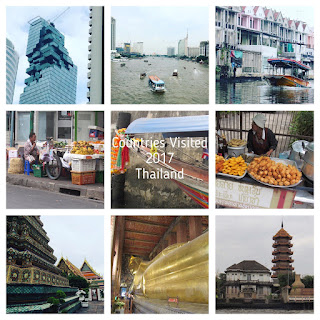 And a sampling of Thailand's wildlife: 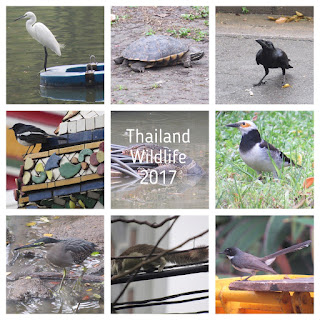 I didn't end up landing a job for 2017-2018 at the Bangkok job fair, but I did get hired pretty soon after, from there it was a race to finish things up in Vietnam and get ready to head to China in July!

Part of that finishing things up involved finally getting a chance to see a bit or northern Vietnam. On our spring break, we took a trip to Hanoi, Halong Bay, and Sapa, and that trip supplied most of the photos for this Vietnam collage: 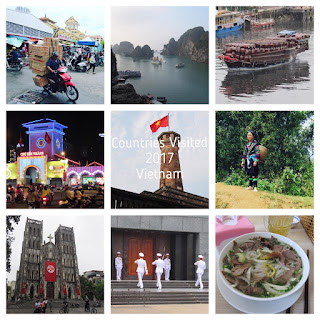 And here are some of the wildlife photos I took in 2017 in Vietnam. 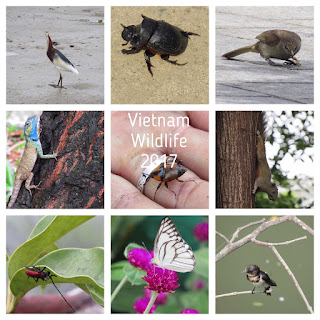 In June we flew home to New England, USA for our annual summer visit. It was frenetically paced and full of lots of visits with friends and family, plus a bit of sightseeing that included Annapolis MD, New York City, Philadelphia, Hampton Beach NH, and Cape Cod MA. 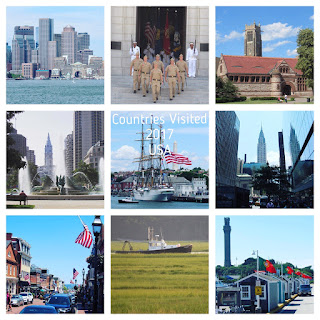 I managed to get some wildlife photos during our travels around the northeastern USA. 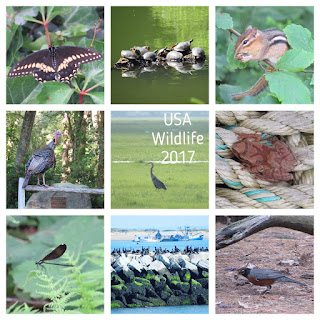 And then on to our next big adventure: China! 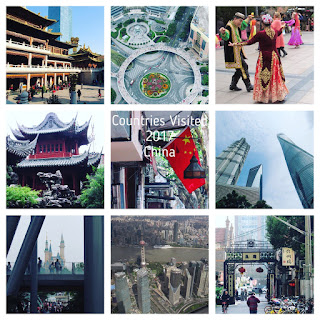 Aside from one business trip that I took to Shenzhen, we've stayed in Shanghai, but there is plenty to see here, including some opportunities for a bit of wildlife photography even in this massive city. 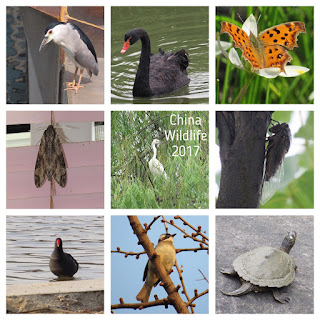 Last up: These are my picks for my best nine photos of 2017. Enjoy! 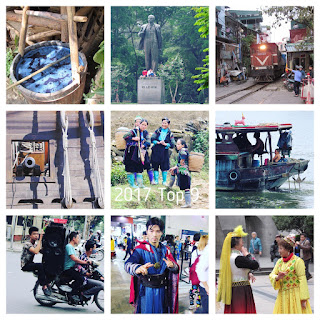 You can see more of my photos of travel, nature, and geekery on Flickr and on Instagram.

Posted by RickSilvaWriting at 7:07 AM No comments:

I fell out of the habit of doing these about halfway through 2017. Trying to get back on track.

This week we were back to school following winter break. We did a "staycation" here in Shanghai, and got to see lots of sights around the city. From here we've got five and a half weeks of school to our next break, Lunar New Year, where we will be hosting friends visiting from Vietnam.

Here are my reviews for the week

Comic Reviews On Comic A Day

I'm looking forward to Mixed Match Challenge, NXT Takeover Philadelphia, and Royal Rumble from WWE in the coming weeks. Looking forward to seeing Black Panther, when it gets released here in China (we had to wait about an extra month for Star Wars: The Force Awakens). And tomorrow, I'm heading to the Magic: The Gathering: Rivals of Ixalan prerelease tournament... with cards in Chinese! That should add an extra bit of challenge to it. And, as mentioned above, Lunar New Year break in February and getting to show visitors around Shanghai.

Posted by RickSilvaWriting at 6:54 PM No comments: