Perils of Picorna On Sale This Weekend At Otakon, Baltimore MD! Meet The Artist!

This weekend (7/30/10-8/1/10), Perils of Picorna artist Missy Pena will be appearing in Artists Alley at Otakon in Baltimore MD with her art group, Four The Win. Stop by her booth and say hello! You will find them at Tables T09 and T10. Missy will have a huge selection of her prints for sale, and she'll have copies of Perils of Picorna #1.

Hope everyone attending has a great time at Otakon!
Posted by RickSilvaWriting at 2:09 PM No comments:

Manga Review: With The Light: Raising An Autistic Child Volume 1 by Keiko Tobe

With the Light: Raising an Autistic Child Volume 1

I previously read the third volume of this series, and it was good enough that I wanted to read the beginning of the story.

This is a fictional story, but it is based on research and interviews with actual parents of children with autism.

The story begins with the birth of Hikaru Azuma. Hikaru's name means "with the morning light" and his mother named him for the beautiful sunrise at the time of his birth. As Hikaru grows, his mother, Sachiko, notices that he seems detached and indifferent to her affection. Sachiko's mother-in-law blames Sachiko's parenting for the troubles that Hikaru seems to have. Then at a routine checkup, a doctor warns Sachiko that Hikaru may be deaf when he shows no reaction to sounds.

Eventually the real reason for Hikaru's difficulties become clear. Hikaru has autism. The difficulties that Sachiko encounters trying to get help and acceptance for her son strain her marriage to the breaking point.

But with the support she finds through programs for special-needs children, Sachiko begins to pull her life together, and is able to find a good daycare center and school for Hikaru. Along the way, there is plenty of drama including several situations in which Hikaru becomes lost, dealings with hostile parents of Hikaru's schoolmates, and the birth of Hikaru's younger sister during a typhoon.

This volume covers the Hikaru's life from birth to his early elementary school years. Tobe's writing is quick-paced, with a good understanding of autism, well-developed characters, and engaging dialogue. The action leans a bit toward soap-opera melodrama in a few moments, but generally the story is well thought-out and captivating. The depiction of autism is detailed and well researched, but in many ways this is really a great book about the joys and sorrows of parenting in general. The artwork is beautiful from start to finish.

The explosion of the volcano at Krakatoa, Java, on August 27, 1883, was loud enough to be heard on Rodriguez Island in the Indian Ocean 2968 miles away. The eruption was the fifth largest known volcanic explosion in human history, and it caused the greatest loss of life of any known volcanic disaster. More than 40,000 people were killed, mostly by a series of massive tsunamis. One of these waves drove the Dutch gunship Berouw over a mile and a half up a river, killing all aboard.Simon Winchester tells the story of the disaster from both the historical and geological perspectives. The explosion was not just a geological cataclysm. It was one of the very first truly global news stories, and it marked the beginning of the end of Dutch rule, and the first stirrings of militant Islam in East Asia.

Winchester provides a host of fascinating details as he traces the weeks and days leading up the the explosion, as well as the background of the Dutch presence in Java and the development of plate tectonics, the theory that finally allowed scientists to understand the mechanism of subduction zone volcanoes like Krakatoa.

He also follows the aftermath of the eruption. The island of Krakatoa itself was obliterated in the blast, but a new volcanic island has risen from the sea, and has provided scientists with a natural laboratory to study a rare instance of primary succession.

Winchester does a nice job of mixing the historical and scientific details surrounding this literally Earth-shaking event.

Here's a quick sample from our upcoming comic book, Zephyr & Reginald: Minions for Hire Issue 3. It's co-written by myself and my very talented wife, Gynn, who also did all of the illustration.

In this scene, supervillain Doctor Despot deals with some human resources issues. 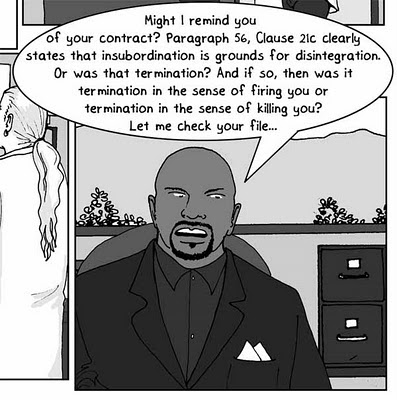 Welcome to the Edge of Propinquity. Issue 55 is now published. The heat of summer brings out the knife edge in all of us and family is at the heart of everything. This month we have a missing person, a person found, a person rediscovered, the discovery of family and the rediscovery of what family can mean.

Four Visitors - Trinity, Part One - by Rick Silva It's Senior Prom night at Danforth High. Tina Cronin and Nick Lorem are looking forward to a fun-filled evening of dancing and socializing. Instead they are in for an eerie encounter on a deserted stretch of road and the beginning of a night that the town of Danforth will never forget.

Solstice - Summer, Part Four - by Ivan Ewert Michael Monroe - aka Mars, God of War - has stripped his mortal life of all that once gave it meaning. Now he searches out an old familiar face, one lost in the weeds to recent memory, but whose lackadaisical attitude may and must prove his simplest way forward.

Mnemosyne - Reach Out and Touch Someone - by Nick Bergeron At last our Hero comes to it - my motivation for being here, my reason for existence. Tired of drifting like a leaf in a wind greater than he understands, he decides to fight back, the sweet boy. Despite my best past efforts, his first step in fighting is with someone else. Silly, silly, and wrong. His next step though, that's perfect. His next step is me, and I'll show him how wrong he is.

Sparrow Hill Road - Do You Want to Dance - by Seanan McGuire For Rose Marshall, prom nights are holy nights, and observing them takes precedence over everything...even her own existence. Back in Buckley Township and confronted by strangers who could be either friend or foe, will she make it to the night's last dance?

Guest Author - Skullduggery at the Junction by Jason S. Ridler What do you do when you come to test the truth behind the Legend and find that there is more to the legend than first thought? Paul is about to do just that. He enters into a battle with The Strangler to discover there is more to his foe than just fighting.

Have you ever looked over the edge and seen something looking back at you?

Posted by RickSilvaWriting at 7:40 PM No comments:

Book Review: Master Harold And The Boys by Athol Fugard

"Master Harold"... and the Boys

This one-act play is set in 1950 in Port Elizabeth, South Africa in 1950. The three characters are Harold, the white son of the café's owner, and Sam and Willie, two black employees who are cleaning up after the day's lunch business when the play begins.

What follows is a conversation that slowly builds into an intense look at institutionalized racism and the dynamics of a broken family. Along the way, the audience learns the history of Harold's childhood, his relationships with his parents and with Sam and Willie, and gets some poignant glimpses of the culture they all live in.

"Master Harold "… And The Boys packs a lot of punch into its dialogue, especially as it reaches its climax. There are some wonderful little details as well, as the conversation touches on music and dancing, comic books and kites, and the question of who were the truly influential figures in history.

The climax brings the issue of race to the forefront and delves into Harold's conflicted emotions about the failings of his father and Sam's role as a father figure in his life.

Posted by RickSilvaWriting at 9:25 PM No comments:

Well, a month or so after starting this blog, I'm already lasping on updating.

Suffice it to say, we've had a lot of fun in the last week or two, including a lot of get-togethers with family. We've got bunches of family staying on the Cape right now, and Kiddo has been having a lot of fun with his cousins.

Today, it was back to wanderings, this time off-Cape to Providence and the Roger Williams Park Zoo.

We saw lots of animals, including this elephant... 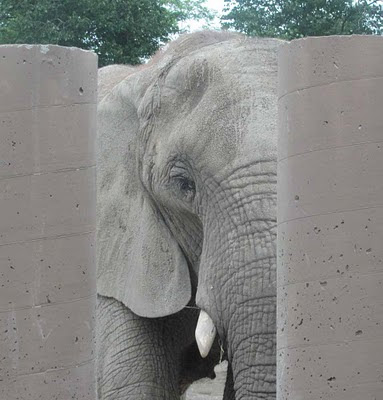 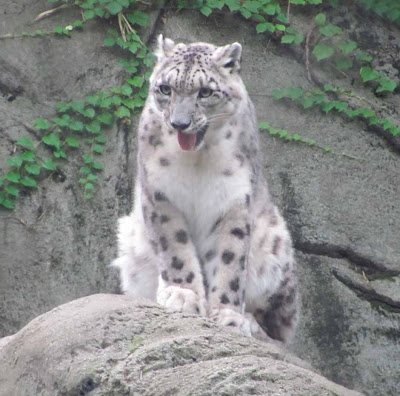 And what has to be the most squee-worthy adorable critter EVER, the red panda! 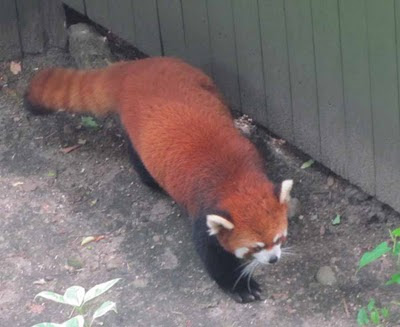 I took a bunch more photos, which are posted in a Gather post.

On the writing front, I completed my July story for The Edge of Propinquity. It will go online on July 15th. I've also made some progress on a new webcomic collaboration with Joe McGlone, and the Perils of Picorna Issue 2 script is down to the last ten or so pages.

We're off to the Boston Harbor islands on Friday (it's free-ferry-day!), which should be good for some pictures. Hopefully I'll be back on track with updating regularly then.
Posted by RickSilvaWriting at 8:09 PM No comments:

We had a pretty busy weekend I went to a birthday party for a friend up in Sharon MA and we got started on making up characters for the new D&D campaign.

Sunday was ChowdaFest in Hyannis. Much chowda was consumed.

On Monday our wanderings took us to another local pond beach, Lovell's Pond, which is in the western end of Barnstable (either in Cotuit or Marstons Mills; not sure where the dividing line between those villages actually is). 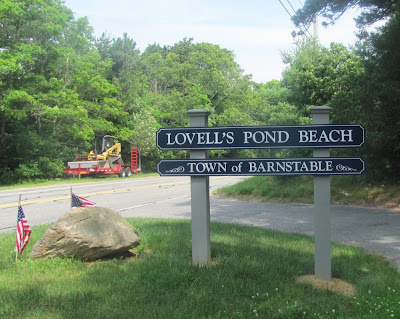 Kiddo had a good time splashing around. 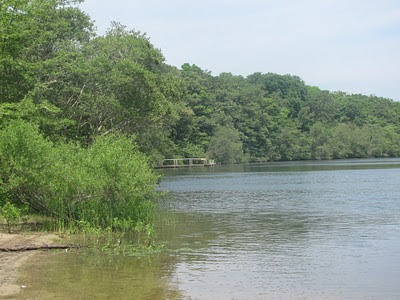 Not much writing Monday night, but I got organized for a scripting session with Amy on Tuesday for Perils of Picorna.
Posted by RickSilvaWriting at 10:30 AM 1 comment: