Our hotel in Ho Chi Minh City was the Lan Lan 2. It was under construction, so half of the lobby was functioning as the whole lobby. And in case you are wondering, yes, there is a Lan Lan 1. It's actually just up the street on the opposite side.
We arrived at night; I think it was about 11 when we got to the hotel. We had the beers that gentleman from the school had provided, unpacked minimally, got the wifi running and did some basic checking in online, and went to sleep.
We woke up around 7 and hit the complimentary breakfast buffet. Now, I this point I was feeling pretty good about the whole jet lag situation. We'd had a decent night's sleep, and we were up at a normal time and eating breakfast.
The main feature at breakfast was pho, which was awesome. 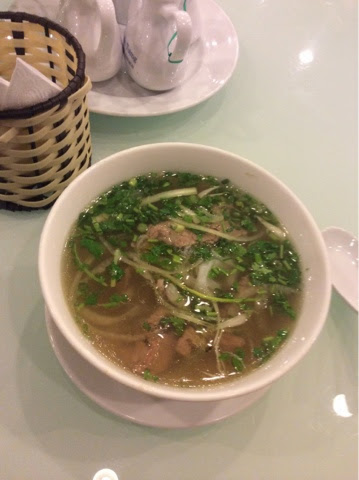 There were two noodle soups available each morning at a little pho station. The bowls were laid out with the noodles and meat and veggies in them, and you would choose one and the server would add the broth, and optionally, sprouts and herbs. You could then add sauces, limes, and/or sliced chili peppers. The buffet also featured American-style pancakes with syrup, a different form of porridge each day (including "snake-fish porridge! No, I didn't try that one, or any of the porridges actually; the pho was too good), baguettes, fruit, and an assortment of other foods.
But getting back to that jet lag... We went out walking in the late morning and got acquainted with the neighborhood, and then pretty much crashed all afternoon. Jet lag 1, us zero.
For the next few days, that was the pattern. Breakfast and a flurry of activity in the morning, non-functionality in the afternoon, restless nights, and waking up at 4 AM to wait for breakfast to open, This is the effect of a 12-hour time shift on the biological clock.
That first night, we had dinner at the Ben Thanh Night Market, which was pretty awesome, if a bit touristy. the market vendors move their wares outdoors at night, and there are outdoor restaurants and vendors selling clothing and t-shirts and all manner of other things. We arrived early, and it was fun seeing it all being set up as vendors appeared out alleys and side streets from all directions dragging carts and folding tents.
The next morning we met our real estate agent and went apartment-hunting. We saw some high-rise apartments with awesome views of the Saigon River. 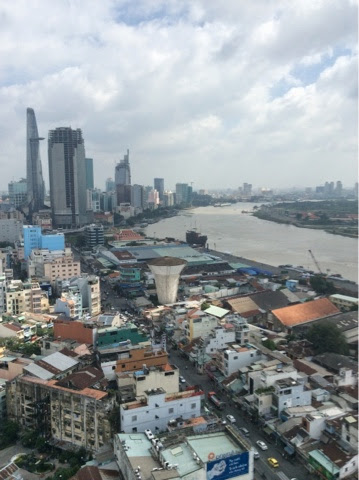 There was another family with us (also teachers at my school), and we all agreed they we were looking for someting in a neighborhood that was better for walking.
From there we headed into District 7 and split up from the other family at the agency office. This was more the kind of place we had in mind: a neighborhood with shops and restaurants all in easy walking distance. This area was almost too Western for our tastes: There was Burger King, Popeye's, Domino's Pizza, and one especially familiar sight: 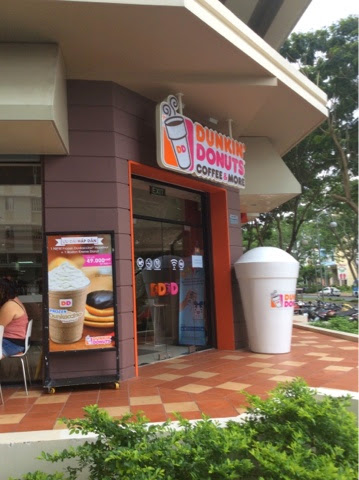 But there were also a ton of local eateries and small shops. By this time, the apartments were getting to be something of a blur. Many of them were very similar. There were a couple that stood out (sometimes for the wrong reason; one was very obviously downwind of a sewage treatment facility), but a lot of them seemed alike.
But we did have one choice we agreed was the best of the lot. It was on a side street, walking distance of all the restaurants, and it had a swimming pool on the floor the apartment was on. Three bedrooms, two baths (and an actual tub in one of them; many apartments only have shower stalls). it was located in a building called My Phuc. Yes, we snickered.
It also had two balconies (spoiler alert: I'm sitting on one of them typing this). There was an elegant hotel across the street which made for a very nice view from those balconies. 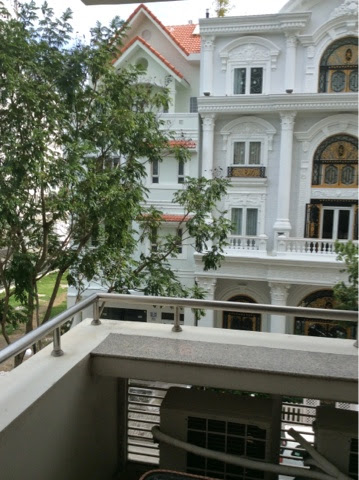 Here is a look at the living/dining area: 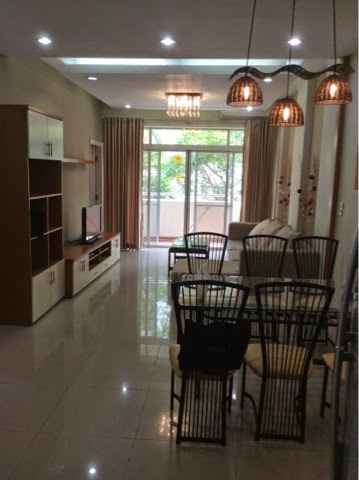 We decided to go for it. We signed the lease the next day, which was Saturday, and we could move in on Monday.
This was also about the time that we all came down with really bad head colds. More on that next post.
Posted by RickSilvaWriting at 4:49 AM 1 comment:

We left Cape Cod around 4 AM Tuesday morning and loaded three suitcases, six carryons, the Kiddo, and one cat into the van to head up to Logan airport in Boston (btw, we used Cape Destinations for airport limo service this time and on our trip to China for adopting the Kiddo, and they were consummate professionals both times; highest possible recommendation!).
Melody meowed for the entire trip to Logan, and we were worried that she might keep it up for the entire 24 hours or so of travel. Fortunately, as it turns out, airport limo vans bother her more than actual  airports or airplanes do. Once we got into the airport she mellowed out. 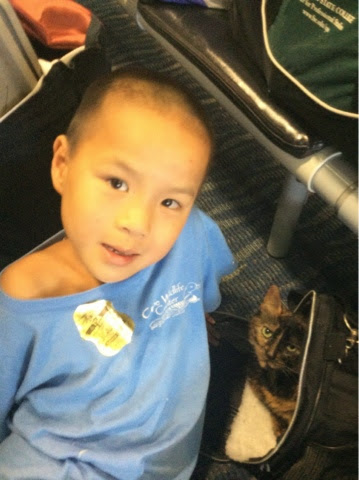 We hit a couple of minor snags early on. Air Canada wasn't sure what to make of our visa documents and it took a bit of discussion to convince them that they were okay. We then had an overweight bag (books!) and a scramble to redistribute the weight. We succeeded in that and finally got our boarding passes and headed to the gate. Fortunately, Air Canada has it's own separate set of gates at Logan, so it has its own security checkpoint, which had basically no line.
We arrived at the gate and discovered our flight to Toronto was delayed. See... No plane. 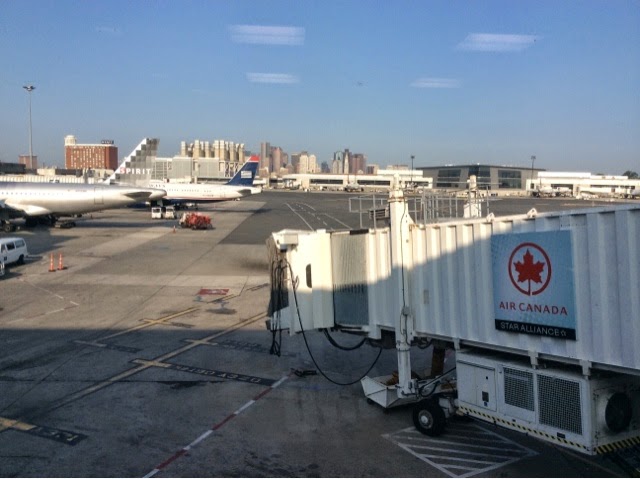 The plane dis eventually show up, and we left three hours behind schedule, which essentially ate our two-hour layover in Toronto, plus the time zone change. 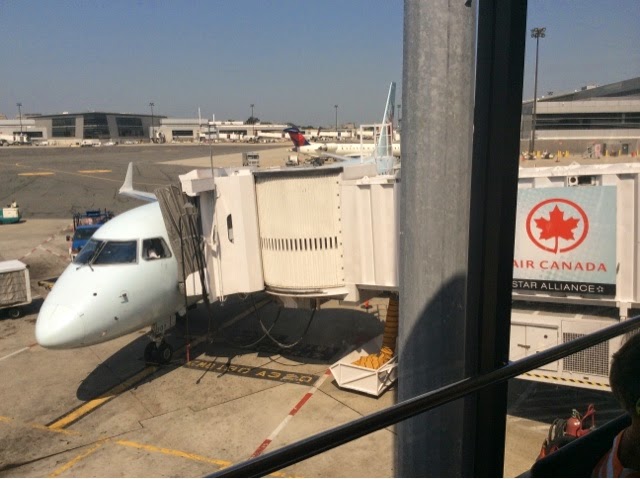 We arrived in Toronto (and got an awesome view of the city skyline on our approach), just in time to line up for boarding for our second leg: next stop, Tokyo Japan.
That flight was our longest at about 12 hours. The highlight was an amazing view of glaciers somewhere around Anchorage Alaska.
Melody had been in the cabin for the first two legs, but was getting transferred to cargo for the last leg, which was on ANA (Air Nippon). We were met at the gate in Tokyo by a whole group of ANA people who were there to take charge of the cat. They were pretty much the stereotype of Japanese courtesy, and werea generally awesome and patient while we assembled our hard carrier and transferred Melody to it. Melody was a trooper about the whole thing too.
Once Melody was checked, we had a few minutes to check out some of the shops at Tokyo Narita Airport, including this very Japanese establishment: 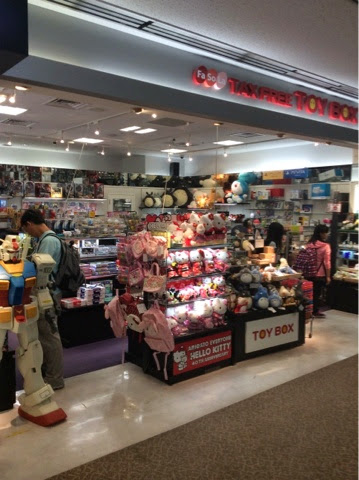 Last leg was five hours with all of us sitting together for the first time, but with Melody in the hold. We were together in the middle seats, but we were flying at night mostly over the Pacific Ocean, so there wouldn't have been much to see.
We touched down in Ho Chi Minh city, and progressed smoothly through immigration, customs, and baggage (Melody was fine), and were met by one of the administrators from my school, who was awesome (he even presented us with a couple of bottles of beer, figuring we needed a drink after all of that!).
We received the first part of our "settling-in allowance", $150 which amounts to three million Vietnamese dong. Who wants to be a millionaire? All three of us get to!
Melody was taken to the home of a co-worker who kindly agreed to look after her until we were set up in an apartment, and we were finally able to settle into our hotel for our first night in Ho Chi Minh City.
Here is the view out our hotel room window. 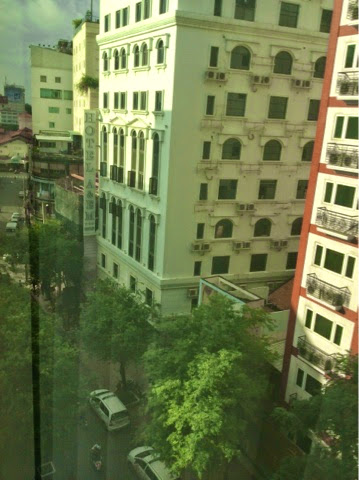 We took a moment to admire the view and then went to sleep. It was now after midnight on Thursday. Journey ended. Adventure just beginning.
Posted by RickSilvaWriting at 1:00 AM 1 comment: