Well, the uncertainty of the last few months has finally come to an end. I am very happy to report that I have signed a contract for a new job for the next school year, in one of the biggest and fastest-growing cities on the planet!

We will be moving to Shanghai, China!

The new job is on a similar calendar to my current gig, so that means that we'll be visiting the US from late June until we head to China in late July.

Up until then, we'll be trying to make the most of our remaining time in Vietnam. We just celebrated Tet, and welcomed the Year of the Rooster, and I've got the rest of this week off from work. I've been getting things reorganized now that I'm out of job search mode, and I've had time to write some new reviews.

How To Train Your Dragon by Cressida Cowell: The amusing book that was the (admittedly loose) basis for the hit film.

Manak: The Silent Predator by Adam Blade: My favorite of the Adam Blade books that I've read with the Kiddo so far.

The fundraiser I was supporting this week has ended, so I'm going to repost links to fundraisers for two people battling cancer that could still use more support.

Sabrina Chick, a friend of a family member of mine.

Duane Nelson, the husband of a friend.


I have a big backlog of photos to process and upload from recent travels as well as Tet festivities around Ho Chi Minh City.


In early April, we're looking at a possible trip to Sapa/Hanoi/Ha Long Bay in northern Vietnam.


We leave for about a month in the US in late June, and then on to Shanghai in late July! No travel plans beyond that, but as of right now, my expectation is that most traveling we do in the 2017-2018 school year will probably be within China. It's a big country with a lot to see!

Posted by RickSilvaWriting at 5:20 AM No comments:

And after two weeks of day-job work, I find myself one vacation once again. This is our Tet break. No travel plans, although we'll visit the Tet festivities happening around Saigon. Mostly focusing on job search and writing/editing over these two weeks, with some time devoted to cleaning/organizing, and getting some day-job prep work done. I have two scheduled interviews so far during these two weeks, and one more being arranged.

Expect more output from me in terms of book and comic reviews over the next two weeks as well.

For now, I have a couple of new reviews.

Fisso's World In Cambodia: Living in a Kingdom of Wonders: Collection of cartoons I bought on our recent trip to Cambodia.

Wish Me Luck: A minicomic from Boston Comics Roundtable.

Sabrina Chick, a friend of a family member of mine.

Duane Nelson, the husband of a friend.

Friend and longtime SF convention attendee, Hugh Casey, who has a benefit convention being held next Sunday (Jan 29) in Philadelphia PA USA to fundraise for his expenses.

Tet happenings around Ho Chi Minh City over the next two weeks. We're also looking into the possibility of a trip to northern Vietnam in early April.


Posted by RickSilvaWriting at 8:17 PM No comments:

To Know Who Needs Help...

I know it's past the season for Christmas songs, but I am thinking today (while I avoid the political) of a line by Trans Siberian Orchestra:

"To know who needs help, you need only just ask."

My mom would have been 70 yesterday. She had her life cut short by cancer, and most of us know someone who they have lost or someone who is suffering from this disease now.

So, right now, three people that either I know or whose loved ones I am friends or family with, are in their own battles with cancer.

My mom was fortunate enough to have excellent health insurance through the union she'd been a member of for many years. She got the best care in available in the world. Many others are not so fortunate. So I'm contributing small donations to fundraising efforts for these three individuals.


Here are the three appeals I am donating to.

For Sabrina Chick, a friend of a family member of mine.

For Duane Nelson, the husband of a friend.

For friend and longtime SF convention attendee, Hugh Casey, who has a benefit convention being held next Sunday (Jan 29) in Philadelphia PA USA to fundraise for his expenses.

I would urge those with the funds to help out somehow, to do the same. For one of these three people, for someone else you know who is in their own battle with cancer, or for a stranger whose fundraising appeal you've found out about.

To know who needs help, you need only just ask.

Posted by RickSilvaWriting at 8:12 AM No comments:

Most of late December and early January was spent traveling.

We had an overland trip to Cambodia to finish up 2016, and then immediately started 2017 by adding a new countries to our list of nations visited with our trip to Bangkok, Thailand. I was there for the International Schools Services Job Fair, and got 8 interviews, but have not yet received a job offer. Several places I interviewed with are still considering candidates, so I may still hear from them, and I've had another interview over Skype since the fair.

We also managed some sightseeing in Bangkok, and there will be pictures and reviews from both trips coming soon.

Not many new reviews since the last recap, as we've been busy with travel and recovery-from-travel.

The Tales of Beedle the Bard by J.K. Rowling: I read this fairy tale collection from the Harry Potter universe to the Kiddo.

Fisso's World in Cambodia: Living in a Kingdom of Wonders by Sophie Lizeray: A collection of cartoons that I bought in Phnom Penh, Cambodia. (Also reviewed on Goodreads).

I'm supporting the Alzheimers Association's efforts to combat a disease that has affected my family among so many others.

I am also supporting the efforts to raise money in support of SCAdian Duane Nelson's medical treatment and expenses.

Over on Comic A Day, I posted two more quick entries today: A 2016 recap, and a quick look at a couple of Thai language graphic novels I picked up in Bangkok.

No immediate travel plans on the horizon. We are hoping to get to the north of Vietnam in the Spring, but nothing definite has been planned. At the moment, we're planning to stay in Saigon during the Tet break, but we might possibly book a last-minute trip somewhere if finances work out.

Posted by RickSilvaWriting at 8:42 AM No comments:

We spent New Year's Eve in Phnom Penh, Cambodia, and got a nice view of the Phnom Penh fireworks from the rooftop garden of the hotel we were staying in.

2017 begins with uncertainty. I didn't sign a contract with my current day job, so we're moving on at the end of the school year. I was hoping to have some definite news on the job front by now, but I've had two verbal offers that fell through for various reasons, so off I go to the job fair in Bangkok, Thailand this week. We'll see if I have something by the end of the weekend. Either way, I'm looking forward to my first time in Thailand.

Traveling: We traveled to Phu Quoc Island and Vung Tau (twice!) in Vietnam. I also had two trips to Cambodia: One work trip to Phnom Penh, and the vacation trip to Phnom Penh and Kep that we just got back from. We went to Singapore in the Fall, the one new country we added to our list in 2016. We had our trip home to the US in the Summer, including the annual father/son road trip, which took myself and the Kiddo to Ithaca NY. Other places we visited in the US included Newark NJ, New York City, Rhode Island, New Hampshire (including a family event on Hampton Beach). I went back to the US for a few days in November for less happy reasons when my Grandmother passed away.

Writing: This was a slow year, writing-wise, but I did achieve my goals of 1) writing 50,000 words as part of Nanowrimo, and 2) writing a complete story for Nanowrimo.

Reviews: I've kept up pretty well with reviews in 2016, reviewing over 50 books on goodreads, as well as posting my ongoing comic reviews on my comic blog, dailycomicreview.blogspot.com.

Movies: I'm not as much of a movie buff as they typical nerd, so I only tend to see a few per year. The 2016 releases that I got to see were (with my one-word assessment):

Here are some collages I put together of pictures I took in 2016. First of all, a set of highlights of the four countries that we spent time in during 2016. 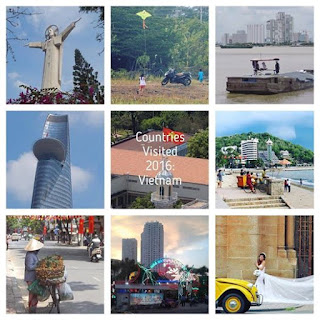 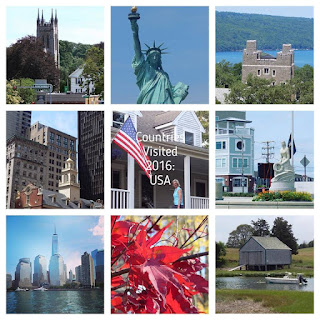 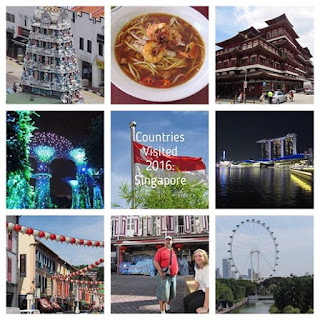 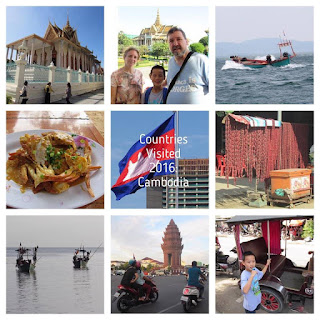 And I also put together a set of wildlife collages by country. 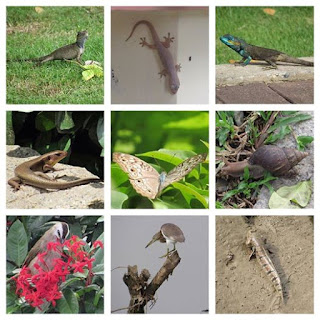 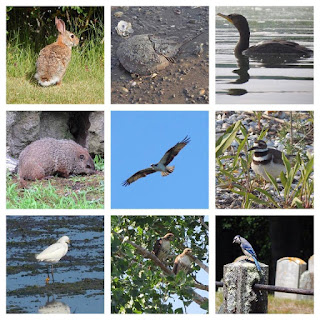 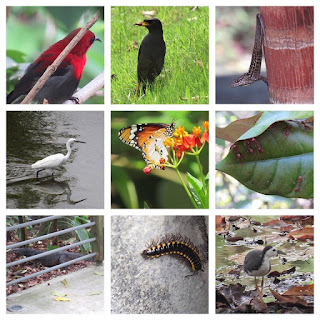 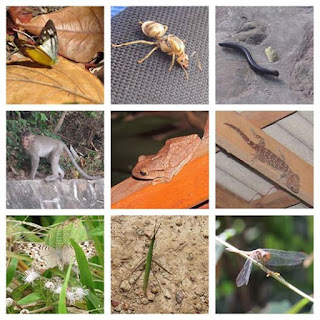 Here's the Kiddo's suitcase at the end of 2016. More flags hopefully coming soon! 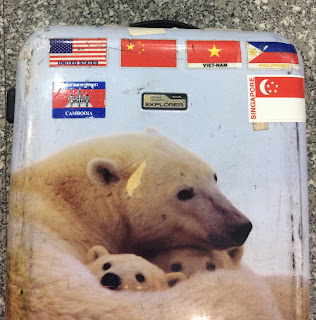 And finally, here's a collage of my favorite 9 pictures that I took in 2016. 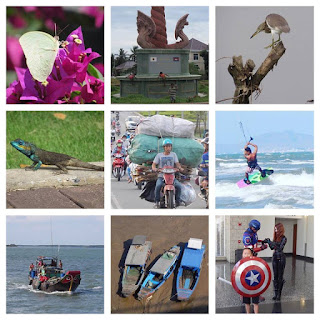 Looking Ahead: Resolutions for 2017

Secure employment! Outside of the US if possible. I'd love for our overseas adventures to continue.

Edit! Edit the Nano novel. Edit the previous novel I was working on.

Play more boardgames. I fell out of the habit of this in the second half of 2016. Need to do more tabletop gaming.

Read 55 books. Having made the goal of 50 for two years in a row, I'm upping the challenge slightly. My 2017 Goodreads challenge is here.

Keep up with this blog and try to expand it and add more content. Keep up with my other social media.

Lastly, I've decided to make a serious attempt at a weekly donation, each week to a different cause I support.

Posted by RickSilvaWriting at 1:52 AM No comments: