"Don't tell me I can't fight,
'Cause I'll punch out your lights…"
-Moxy Fruvous

Do we really need a reason for a good fight scene? Well, in comics, SF, fantasy, and the rest of that vague continuum that we refer to as "genre fiction" the answer might at first appear to be no.

Flip through the typical superhero comic, and you'll find it loaded with fight scenes. They are everywhere. It's not unheard of to have an issue that is basically one huge brawl punctuated with the occasional bit of dialogue, usually to set up the next exchange of punches or gunplay or whatever.

When I write scripts for Stone and Perils of Picorna, I write a lot of fight scenes. And I've written a fair amount in my Luminations and Four Visitors serials at The Edge of Propinquity.

Part of what's going on here is that I try to write fight scenes with a purpose. I want to avoid having the scene detract from the story. And that means that it needs to do more than just advance the plot. At the heart of each story are the characters and the changes that the characters undergo over the course of the events in the story. That's what holds the reader's interest.

Quick obvious (some might say blatantly obvious) example involving a well-known battle scene: Luke Skywalker blows up the Death Star. Obviously that advances the plot. The Rebel Alliance is not destroyed. They are now free to um… relocate to Hoth, actually. But the point is that the Rebellion lives on. But that's not really the point, is it? The point is that Luke is able to find the faith that he had been seeking, and his acceptance of the Force makes the difference, allowing him to perform the heroic feat that he would not have been capable of back when he was this whiny punk who just wanted to go into town to shop for power converters.

The battle scene is necessary to show that the hero has grown. That's the kind of purpose that you often see in big, climactic fight scenes. We've got one of those planned for Perils of Picorna. In issue #6. Because big, climactic scenes tend to happen, well, near the climax. I'm writing a big, climactic fight scene into Stone as well, although in that battle, the focus will not be on Donna Stone, but on the soldiers she has taught and trained.

Earlier in stories, fights serve other purposes. Here are a few:

To put the hero or villain over. Actually, since I'm dipping into my pro wrestling jargon here, I should probably have said to put the face or the heel over.

This is a scene that builds a character up. Superhero comics use this type of thing all the time, with mixed results. Sometimes it works. Occasionally it fails badly. Sometimes it just feels like a dull routine.

A group of muggers close in on their victim, who is walking alone along a shadowy street in a Gotham City slum. Most of you can probably figure out what's coming, and let me assure you. The purpose of this is not because The Batman has some character flaw that he needs to overcome in order to beat these guys. These guys are jobbers (cannon-fodder would be the term for those not so inclined toward WWE action). The reader is going to see the Batman take these generic thugs apart, and the purpose is nothing more than to remind the reader that the Batman is someone that you do NOT want to mess with.

This works equally well with villains. After all, we want the villain to present a challenge for the hero. Otherwise the story is not going to be all that interesting.

Here's an example of how NOT to do this. Meet Vultura (played by Lorna Gray). 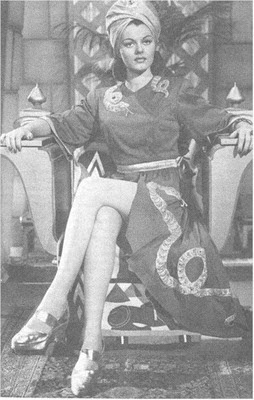 She's the villainess in the serial Perils of Nyoka (1942), which is one of my inspirations for the Perils of Picorna comic book that I co-write.

Vultura is in a fight scene with Nyoka (Kay Aldridge) in the first episode. It doesn't go well for the villainess. She gets trounced. In fact, Vultura needs a guy in a gorilla suit to help her by the time it's all said and done.

This is a problem, because like I said we're only in episode 1. And we've just established that our "Big Bad" villain is no match for the general spunk and scrappiness of the heroine (let's just say that nobody actually displays a whole lot of fighting skill here; but Kay Aldridge does totally bring the scrappy).

In Perils of Picorna, we have a fight scene between our (scrappy) heroine Picorna and our villainess Jespina at the beginning of the second issue, and we went for a different result. Here's a bit of preview from the upcoming second issue (featuring the artwork of the awesome Missy Pena!): 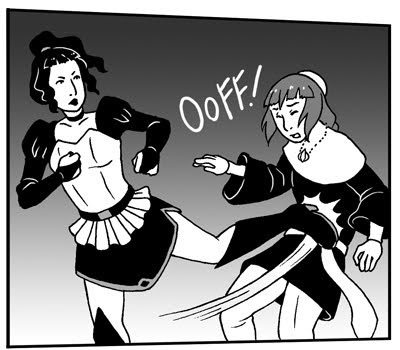 What we're doing here is establishing the villain as a challenge (getting her over, as the jargon would have it). A difficult challenge, which will hopefully get the readers wondering how Picorna is ever going to find a way to defeat Jespina.

Fight scenes can also be used to provide lesser challenges for the hero, possibly to mark the progress on the heroic journey.

Fight scenes are fun to write, so it's easy to get caught up in them, especially in a fighting-heavy genre. When I write, I try to approach each fight scene with a sense of purpose, and that purpose is usually more than just moving the plot along. It's part of the establishment, growth, and development of characters.

I'm looking forward to writing some good character development, including the occasional punch in the face.
Posted by RickSilvaWriting at 9:44 PM No comments:

Processing #1: Where Do I Put The Sidekick?

When I started this blog at the beginning of the summer, I envisioned it as a place to share writing and parenting experiences. I started out posting a lot of photo-heavy reports from some of the places I was taking the Kiddo over the summer, but somewhere in that I got too busy to keep up. As the summer came to an end and some writing and comic publishing deadlines started to loom (not to mention the school year starting up again), I began to think about new approaches to the blog.

This is the (long awaited! ha!) result of that thought process. I'd like to blog about the writing process, for comics, for serial fiction, for zines, for short stories, and eventually for novels as I follow the twisting path my writing seems to be leading me on. This is about process, and it's about me reflecting on what I've learned and what I'm continuing to learn, so I'll be calling it "Processing". Hopefully this will be the first installment of many.

I'm not going to spend time on my background. I'm Rick. I write comic books. I write other things. Today's column is about Perils of Picorna, a fantasy manga comic that I co-write and self publish. Further information about myself, my comics, and my other work can be found online easily enough. My website, dandelionstudios.com is a good starting point, and I'm on several of the popular social networking sites and always happy to meet new friends in those places.

Processing: Where Do I Put The Sidekick?

We're in the brainstorming phase of the third issue of Perils of Picorna, and I have found myself falling into a pattern that I don't like.

I keep trying to find excuses to remove Petrus from the story. 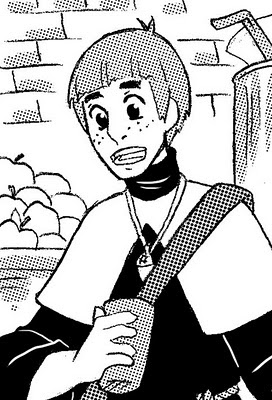 Petrus is the protagonist's main companion. He's her sidekick, to use the traditional comic term, although he's also a potential romantic interest. And in a lot of the scenes that we are planning, he's just not all that convenient to have around.

We play around with clichés at lot in Perils of Picorna. It's patterned after the cliffhanger serials. We absolutely delight in clichés. We've got Picorna hanging off a cliff (well, a tall statue, actually) to end the first issue. The cliché that ends the second issue is even more wonderfully outrageous.

But as much as we love clichés, we delight even more in tweaking or breaking them.

The hero is in the final battle with the villain. The hero's love interest (the damsel in distress; we'll just call her Damsel for the rest of this example) needs to be present, because of course, as the cliché requires, she needs to be "saved". But of course, we can't have her, you know, do anything USEFUL in the impending battle because it makes the hero look weak if he needs Damsel's help to win.

So we get an array of tactics to conveniently remove Damsel from the scene so that we can get on with the brawling/dueling/slaying/jello-wrestling. At times, writers will simply have Damsel stand around uselessly, looking vaguely concerned. If they can't get away with that, then maybe she could be conveniently tied up, locked in a cage, or frozen in carbonite (What the heck is carbonite, anyway? Oh, never mind. I looked it up. It's the hypothetical di-deprotonated anion of dihydroxymethylidene.).

Of course, more modern sensibilities will demand that Damsel actually show some degree of competence. This is typically accomplished by having her offer a measure of token assistance before being taken out of the fight, typically with a single blow that manages to render her unconscious without unduly messing up her hair or makeup. Classic example of the above can be seen in the climactic fight scene of the (admittedly obscure) film The Karate Kid II.

Therein lies the danger. We didn't break the cliché. We just gender-reversed it. Which is cool in one sense because it's still not done often enough. Clichés need to get gender-reversed. It should happen a lot.

But the trick of the writing comes in finding more creative solutions, and that's what we're going to try to do. Petrus gets knocked out on the next-to-last page of the Issue #1 so that Picorna can have her (literal) cliffhanger. That allows her to do a fun escape scene followed by a solo fight scene to begin the second issue. It's a good sequence that accomplishes a lot.

And now we need to be careful not to do it again. The book is called Perils of Picorna. It’s Picorna's story. As much fun as Petrus is (and he's really a great character), he's still a supporting character. So that means that Picorna is going to get more of the action (and in our cliffhanger fantasy genre, that means she gets more fistfights, swordfights, high-speed chases, falls, tumbles, vehicular collisions, and narrow escapes).

But if we start falling into a repeating pattern of simply removing Petrus from the action every time we hit some big scene, the story will get predictable and the writing will look lazy.

So right now, Amy and I are brainstorming some creative ways to mix up the action. We're not doing anything new with most of this. As I said, we have fun writing clichés.

But what is really fun, and really challenging, is looking for the little tweaks and variations that will break the cliché situation out of the familiar patterns and leave the readers smiling at that little twist that they didn't see coming.

That's what we're aiming for.
Posted by RickSilvaWriting at 8:06 PM No comments: