My 5 Favorite Books Read in 2021
5. Molly House by A.R. Pip
4. Saga: Compendium One by Brian K. Vaughan and Fiona Staples
3. Brown Girl Dreaming by Jacqueline Woodson
2. Seraphina by Rachel Hartman
1. The Immortal Life of Henrietta Lacks by Rebecca Skloot
Posted by RickSilvaWriting at 10:54 PM No comments: 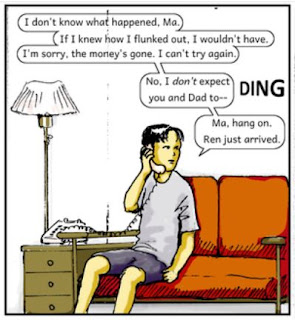 Alien Romance is a new webcomic by my awesome wife, GS Silva, and it is now online on Patreon!

Cathy dreams of meeting an exotic American rock star. Maurice wishes for a girl as weird as the characters in his sci-fi novel. When they find each other, they quickly learn that alien romances are HARD. Follow their misadventures as this graphic novel unfolds here on Patreon.

You can read the free content for the story, and consider becoming a patron to get exclusive content at:

This is the first new comics work from either of us in a while and we're both incredibly excited for this new story!

Posted by RickSilvaWriting at 10:42 PM No comments:

[WWE] Annual Wrestlemania Predictions Post From Me And Kiddo

It's Wrestlemania Week! Here are predictions from myself and the Kiddo

My Pick: Gonna go out on a limb here... Bella Twins as a last-minute surprise entry.
Kiddo's Pick: The Riott Squad

Bad Bunny and Damian Priest vs. The Miz and John Morrison

Posted by RickSilvaWriting at 8:24 AM No comments:

Annual Royal Rumble Predictions Post From Me and the Kiddo

5. Eleanor Oliphant Is Completely Fine by Gail Honeyman
4. The Graveyard Book by Neil Gaiman
3. From the Mixed-Up Files of Mrs. Basil E. Frankweiler by E.L Konigsburg
2. The Plague by Albert Camus
1. Lab Girl by Hope Jahren
Posted by RickSilvaWriting at 9:24 AM No comments:

None of us are sick. No one we know is sick right now.

As of yesterday, the active Covid-19 cases in China stand at a little under 5000. That's about 1/10 of the number of cases that the US has right now. Almost all the new cases in China are coming in from overseas at this point, so the real focus here is on quarantine procedures at ports-of-entry. So far, new local infections have been near zero for the last week or so.

Schools remain closed in Shanghai. My school is letting the Kiddo come in for half-day tutoring, which has been a huge help for us in coordinating his e-learning with my e-teaching. No word on when schools could re-open, or if we're doing this for the rest of the school year.

Otherwise, a lot of Shanghai is back to normal. Malls are open at night again. Most restaurants are now open for eat-in as well as takeout. Last night was the first time since this started that I saw a restaurant that I would describe as crowded. Grocery stores are fully stocked (there were never any serious shortages or panic-buying). Not sure if they've added night hours again. The Metro has not yet resumed late-night hours, but crowds on the subways and buses are getting back to normal levels. Just when I was starting to get used to always getting a seat.

I saw a discussion on a fb post where one person speculated that the military would be needed to enforce quarantine restrictions in the US, and someone replied "if you want that, you should move to China." Folks, I DID move to China, and we have not had soldiers on the streets of Shanghai at any point in this. We have elderly apartment-complex workers taking people's temperature, along with mall and fast-food employees. We are not living in martial law here.

I still get my temperature checked about five times a day on average. Everyone is wearing masks when they go out.

I would describe things here as cautiously optimistic. People are worried there will be a second wave, but the general feeling seems to be that China beat the first wave of this, and every day that goes by with that total caseload dropping frees up more medical resources for dealing with the imported cases.
Posted by RickSilvaWriting at 5:18 PM No comments:

Okay, to start off, none of us are sick. No one we know is sick.

School closure has been extended until the end of February, with no specific re-opening date, but we could theoretically be back to work on Monday, March 2, with students returning Tuesday, March 3).

I am settling into the routine of running elearning classes. The workload is about the same as if I was working normal hours. The actual teaching time is less; the prep time is more because I'm working with unfamiliar technology. The Kiddo has also been adapting reasonably to the elearning routine.

I am aware that the US State Department issued a recommendation that Americans in China stockpile food. There are always some minor grocery issues around the New Year holiday as stores close and there is some minor disruption to supply chains, so we had already made sure to have a reasonably stocked pantry at the start of the New Year break. Since then. we have kept ourselves stocked up to a higher degree than usual.

That being said, groceries have not been a problem. Our local grocery stores have cut back hours, but this really just means they are not open at night. They are generally well-stocked, and the items that have been in low supply have not been anything essential, and even those items have been restocked on occasion (peppers, onions, and bread, for example, have been sold out sometimes, but we've been able to get all of those eventually). There have been no unusually long lines.

Almost all restaurants are closed right now. Some of the ones that are open are take-out only. Or, like our local McDonalds, they won't actually forbid you from eating in, but they discourage it and only give food in takeout bags. Restaurants may start to open back up tomorrow, when many businesses are set to reopen. We don't know.

We are wearing masks when we go out. Masks are required to enter most businesses. I also don't want to risk the disapproval of people on the street by going without one. Masks are still in short supply. I did manage to buy a few at a convenience store a couple of days ago, and we put in an order for some online, which should be delivered on Monday. We have enough reusable ones to get by.

There are body-temperature checkpoints to enter most malls, some stores, and most apartment complexes, including ours, so we get our temperature checked a couple of times a day on average.

We've been avoiding unnecessary travel in general. We go out for grocery shopping. We walk around the neighborhood for exercise. Traffic is very low, and buses/subway are much less crowded than usual. Again, some of this might change tomorrow when more people return to work.

I know that there have been some alarming photos floating around with people in hazmat suits and carrying guns and whatnot. The checkpoints at the railroad station do have people in hazmat suits. The only guns we've seen were carried by regular cops. In theory, bank security are armed (their guns are not always real), but we haven't even seen any of those because the banks have been closed).

As far as we've been able to tell, there is no overcrowding at hospitals here. One friend of ours went for a routine appointment, and said the hospital was pretty empty. That was also what we observed when we passed by several hospitals in Nanjing the week before last.

Overall, the biggest problems we're dealing with are cabin fever, boredom, and uncertainty about how long this will last and possible disruptions for travel plans down the road (next travel plans are in early April). I don't want it to sound like we are not taking this seriously, but I also want to reassure everyone that right now, this is a lot more on the scale of an inconvenience than anything else.
Posted by RickSilvaWriting at 5:13 AM No comments: