We're halfway through the science fair at my school. We did the high school and middle school version yesterday. The elementary school kids get their turn this week, including our Kiddo, who finished his project on salinity of local rivers on Friday.

Also this week are a bunch of Thanksgiving festivities: An "Authors Tea" where the elementary school kids read their creative writing, a potluck Thanksgiving on Wednesday for lower school kids and parents, and then turkey and pumpkin pie for school lunch on Thursday. We get a day off on Friday, and we'll have a simple Thanksgiving dinner at home Thursday night and put up the Christmas tree.

I headed back to Qibao today for a bit of exploring and some Christmas shopping. I found this in a souvenir shop and had to buy it:

I've got in between all of that, I've continued to make my way through the Random Stack of Unread Comics.

Amulet Book Five: Prince of the Elves by Kazu Kibuishi.

Possibly playing in a Magic: The Gathering Unstable draft next weekend.

Four weeks to go until Christmas break, with exams and holiday concerts on the horizon.

We've also got a day trip to Suzhou planned in early December.

Then it's off to the USA for two weeks around the holidays!

When I think of Stan Lee, I hear his voice from the pages of Marvel's original "best of" compilations, produced in the 1970s, long before I'd ever heard the words "Graphic Novel" or "Trade Paperback". My brother and I had the whole set: Origins of Marvel Comics, Son of Origins, The Superhero Women, Bring on the Bad Guys, and our favorite: Marvel's Greatest Superhero Battles. 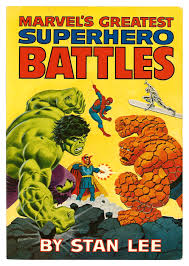 We got a great introduction to the classic superhero stories of the 1960s in the pages of those books, but for me, there was more than just the comics. I would read all of Stan Lee's introductory essays, discussing the behind-the-scenes origins of the characters. How it seemed obvious that the team-name for a team of mutants should be "The Mutants", until his editors worried that kids wouldn't know what that word meant, leading to a session of brainstorming that resulted in the X-Men. How when thinking about how every superhero had a list of special abilities and one weakness, he thought of the idea of putting the focus on the weakness, and came up with the concept of a blind superhero. How superhero characters were becoming so powerful that you may as well make God a superhero. But if you couldn't get away with that, then how about a superhero who is a god?

There was a lot of history there, admittedly clouded by Stan's ego, as I would see later in life that he enjoyed being the voice of Marvel, and that he wasn't always about sharing the credit.

But what his words between the comic pages in those books meant most to me was that here was a man who was creating stories, writing fantastic adventures, and he was making a living doing it, and having fun making a living.


Posted by RickSilvaWriting at 7:17 AM No comments:

Appreciative of the military service of my Dad and both of my Grandfathers on Veterans Day.

We just finished a short week at school, and today is the first of two makeup days after the unexpected school closure due to the China International Imports Expo and President Xi Jinping's visit to my neighborhood. The closest I got to the expo was seeing some of the attendees heading to dinner at Paradise Walk Mall, and walking through a display on international businesses in China that was set up on the mall's ground floor. Today is a work-from-home makeup day for students and teachers, and it has gone smoothly so far. We do a Saturday school day in early December to make up the other missed day.

It was also progress reports time at the day job, so things were busy during the three-day week. And next week is another busy week, with science fair happening.

I was generally happy with the election results in the US, especially Question #3 passing in Boston to reaffirm transgender civil rights. Frustrated that this was even put to a vote, but relieved at the results.

We went back to Minhang Sports Park yesterday for a nice walk, and then had a quick stroll through Qibao Old Street. I also headed in to Pudong for a bit of exploring and picture-taking, although the park really supplied the best photo opportunities of the day.

I've seen the first few store Christmas decorations of the season. China does decorate for Christmas a bit, but they mostly wait until December. Which I really like better anyway.

One thing I forgot to mention last week: The book Jedi Academy, which I finished and reviewed the week before last, was the 70th book I read in 2018, which was my reading goal for the year. You can see the full list here. I'm going to push for more. Still have about 150 pages to go on 900+ pages of Don Quixote!

I've got some words written on Nanowrimo, but I'm nowhere near quota, which is okay. I'm not pushing it this year.

And I've also managed to do some comic reviews.

Rogue One: A Star Wars Story #6 from Marvel Comics.

Science fair next week at the day job.

It's looking like I'll be heading to Shanghai Disneyland with the Kiddo on our Thanksgiving Friday holiday in two weeks. There's also a possible Magic tourney happening that weekend that I might be playing in.

Looking forward to WWE Survivor Series coming up in a couple weeks, and then TLC in December before things quiet down somewhat until Royal Rumble.

We're looking at a day trip to Suzhou at the beginning of December and maybe some other touristy stuff in the Shanghai area between now and the holidays.

Then we're heading to the USA (staying in New Hampshire and Massachusetts) from December 19 to January 2. Looking forward to coming home for the holidays!

Posted by RickSilvaWriting at 1:50 AM No comments:

After all of the vaguebooking about upcoming travel plans, I can now announce: We're traveling to the US for our winter break! This will be our first time coming home for the holiday season in over five years! Looking forward to a nice New England Christmas with friends and family!

This week was Halloween, which is a big event at my school. The Kiddo became a two-time champion, winning the "Most Original" prize for his reptilian politician costume! (He won "Best Makeup" last year as WWE's Finn Balor/The Demon).

In other news, I do a set of daily goals for writing, language practice, diet and exercise, and blogging. I set a reward goal for 50 points for a week, which is pretty hard to achieve. I started the points system at the beginning of the school year, and the week before last was my first 50-point week. So last night I headed into town to a geeky mall near People's Square that I'd heard about and rewarded myself with some Magic: The Gathering purchases.

I really enjoyed WWE Evolution. Great show! I will not be watching Crown Jewel.

It is now into November, and I have not started Nanowrimo, although I am planning to participate. This year my plan is to write the second draft of The Lady of Three Faces, which was my Nano project last year until I tripped and broke two fingers a few days into last November. I'm not going to sweat wordcount this year, but hopefully Nano season will give me some motivation to make some writing happen.

In the meantime, I've written a couple of reviews.

Science fair is happening in a couple of weeks. Kiddo has been working on evaporating his water samples to measure salinity.

I may be going to Disney Shanghai with the Kiddo for a classmate's birthday party around Thanksgiving. We're also looking at a possible day trip to a nearby city on that weekend on one of the non-Disney days. Actual Thanksgiving festivities will probably be low-key. Maybe a baked chicken with potatoes and veggies and a bottle of wine on Thursday night. We get Friday off for Thanksgiving, but not Thursday. The school usually serves turkey and pumpkin pie for school lunch that day.

Busy season in WWE is beginning to wind down. Survivor Series and NXT Wargames in a few weeks, and then TLC, which will also include the finals of Mixed Match Challenge. I haven't heard any plans for Tribute to the Troops, but that usually occurs around this time of year too. They're also doing a Starcade show, but last year's was not televised. Not sure if there are any plans to put this one on WWE Network.

I bought some Magic cards, but the timing of events over the next few weeks doesn't work well for me. Hopefully I can get into at least one or two more drafts here in Shanghai before we leave for our trip to the US. I'll try to get to a couple of events in the US when we're there.

As mentioned above, we're going to the US for Christmas. We'll be in New Hampshire for most of our visit, with some time spent on Cape Cod and in Boston. Very excited about that trip.

As a result of the splurge on the Christmas trip home, we'll probably be spending Chinese New Year here in Shanghai. We have some general ideas for travel plans looking further ahead, and some major decisions to make about long term plans. I'll tell more when we know more.

Posted by RickSilvaWriting at 6:49 PM No comments: