It has, once again, been a while since I've written a general blog entry. I'd like to get back to more journaling, but I feel that I need to do the standard update-on-life post just because it's been so long. So bear with me as I get you up to speed. 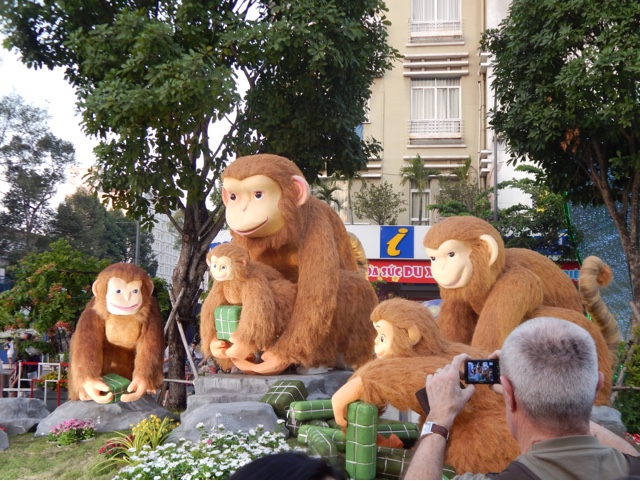 I'm writing this from a coffee shop that is one of only two businesses open today in a big mall here in Ho Chi Minh City, Vietnam. The other open business is McDonalds, and yes, I did just have a Big Mac, but like I said all the local restaurants are closed.

We are still living in Ho Chi Minh City, and I'm working the same teaching job that brought us to Vietnam. I renewed my contract, so we'll be in Vietnam at least through the 2016-2017 school year. Gynn is working on a whole range of different art projects, and showing me up with her growing knowledge of Tieng Viet. Kiddo is in second grade, and I'm now working at the same campus where he attends school. He has become quite the Star Wars fan, and is learning to play Magic: The Gathering.

Since my last general update (last July), I have...

Bought a motorbike. Rode it to work with the Kiddo on the back from August into November...

Got into a wreck on said motorbike. Broke my left humerus in three places. Kiddo was not on the bike at the time, thank God. Yes, I was wearing a helmet. Spent three days in the hospital with the broken arm, then proceeded to land back in the hospital for another two weeks when the surgical wound developed an infection.

Traveled to China (broken arm and all). Had an amazing trip to Shanghai, Wuxi (Kiddo's birthplace), and Beijing on our Christmas break.

Other travel I've done: Work trips to Phnom Penh, Cambodia, and Jakarta, Indonesia, and a beach getaway to Mui Ne, Vietnam, all before I got in the accident. We also just got back from another quick beach getaway, this time to Phu Quoc Island, Vietnam.

We've moved apartments twice since the summer. Our new place is on the 16th floor in a big apartment complex that's in a very convenient location for the commute to work.

I'm back to riding the motorbike occasionally! Gotta get back on the horse! But I'll wait until I'm healed up a bit more before I'm back to commuting by motorbike to work on a regular basis. Until then, the bus works just fine.

With the medical issues, and the moves, writing has been decidedly on hold. I have been getting in a lot of reading. I finally made that 50-book goal in 2015 that I set for myself every year. And I've been taking a lot of pictures. I'll do a rundown of all my social networking presence in an upcoming post.

It's very much my hope that the Year of the Monkey, will be a year of more blogging, more writing, and more adventures in Southeast Asia.

Posted by RickSilvaWriting at 2:07 AM No comments: